Terra Restaurant has a vision to educate its customers about local food. It is a restaurant that cooks with the season, with local and seasonal ingredients and a new menu each month to reflect and show what seasonal food Kamloops has to offer. For example, in November, there is no asparagus and in May, no pumpkins. Customers can choose creative dishes inspired from what’s around them. Terra also offers cooking classes where people can learn about ingredients, flavours and techniques; however, their main focus is on educating people about local food and ingredients.

Why the Cooking Classes Began

The cooking class was inspired by David’s love of teaching, which began while teaching English in Japan. A six-month teaching trip turned into opening a language school with a friend a few years later. David mentions that his love of teaching, as well as customer demand, are how the cooking classes came to be. People wanted to be “able to take some of the flavours and food that [Terra restaurant creates] and make it at home.” He found that when he began cooking, part of its joy lay in a supervisory role because he could “take young cooks and work with them to teach them things.”

Terra Restaurant has offered four cooking sessions that David has taught at the restaurant and, for the first time, Andrea will be teaching a class with him. They will be having a ‘Cocktails and Canapés’ class, where Andrea will be preparing cocktails from their menu and showing everyone interesting ways to make cocktails and prepare food to go with them. The idea is that people could have fun with friends and that they could take the knowledge and skills home with them so that they could host a “really nice cocktail party for [their] friends.” (David, Chef and Owner)

Size of the Classes

Given the size of his kitchen space and his non-traditional methodology, David prefers to keep his classes to around twelve students. He prefers it that way because he likes to get everyone involved and doing things with their hands because more information is retained when touching and feeling, rather than when just listening.

David tends not to repeat classes unless he finds them really popular. For example, he has had a Foundations class almost every session, sometimes with a second-level Foundations to follow it. These classes teach basic knife skills and kitchen strategies for doing things. It also teaches students how to make soup, stocks, and sauces. The other classes done in a seasonal session are typically based on the time of year and what David presumes others will find interesting. For example, they had a class honouring the memory of Anthony Bourdain, a famous chef and author, who sadly passed away during the summer of 2018. Sometimes his classes are inspired by popular television shows like Game of Thrones, which he called ‘Winter is Coming,’ featuring some stews, preserves and other foods they may want to pull out in the winter months.

How Long Each Class is

Each class runs from 9 am – 12 pm unless it’s a special class that needs an extension. For a full schedule, please check out their Facebook page.

Some few local farms that Terra Restaurant uses are: 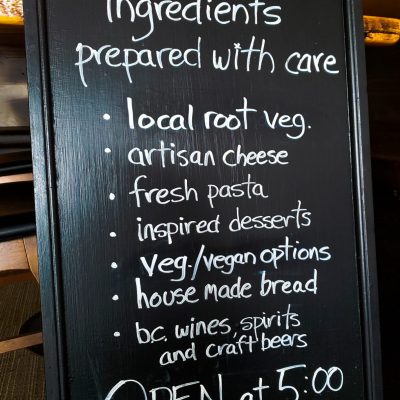 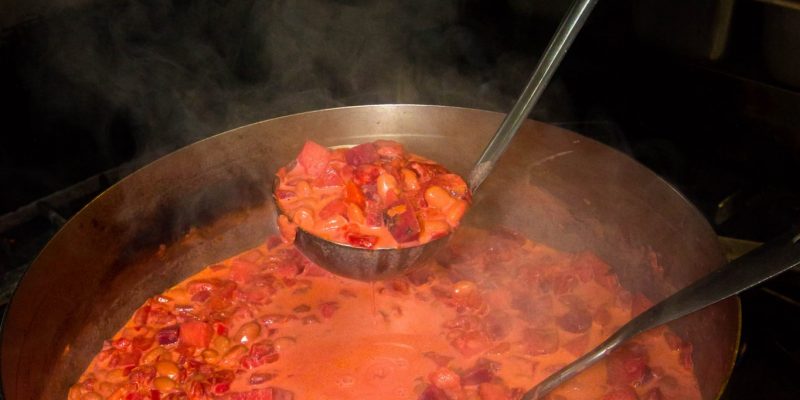 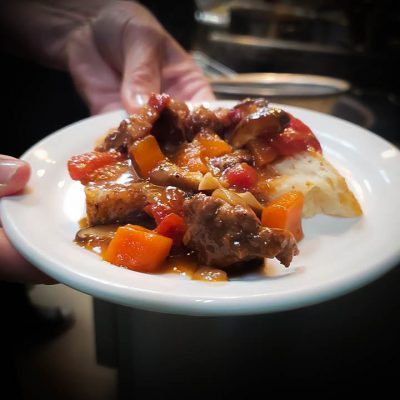 What’s available and seasonal is what inspires each dish. Terra Restaurant cooks with what’s seasonal at the time. In the winter months, it means they’re cooking with a lot of root vegetables and things that can be stored. This means heartier food in the fall and winter.

Inspiration to be Local

“Prior to going to chef school, I spent four years in Japan and I got to know a family in the restaurant business and Japan’s culture, more importantly, their food culture, really ties to the seasons. There is a very rigorous doctrine of what you eat and when. If it’s New Years, you’re eating a particular kind of food. It has a really strong cultural and religious symbolism for them and in the spring, there are things you eat, and you don’t eat them any other time of the year. I think that kind of got in my head a little bit and then, when I went to culinary school I was very fortunate one of my instructors was a very brilliant chef. She ultimately became head of Slow Food Canada and owns her own place as well. She really drove home this idea of using what was grown close to you, working with local farms, growing your own food with a very European kind of approach, due to her training in Europe. That was very influential, and then my first job out of culinary school was in a place that changed its menu every month. My second job was in a resort place on Vancouver Island that did a new menu every day and it was a really challenging environment where we would all arrive at 9 am and see what was harvested in their beautiful lush gardens. They had edible herbs and lettuces on the grounds and then local farmers would arrive and drop food off; we had to create our menu from what was available that day. That really drove home that idea of being able to cook with what’s available, what’s fresh and learning how to cook with the seasons.” -David, Chef and Owner

What is Slow Foods

“Slow food is more of a movement rather than a concept. It began in Italy 30 or so years ago and the idea was to take cooking back from fast food to prepare it in a way that was more thoughtful, artismal and more nutritious. This movement grew internationally; it looks at heritage seeds versus GMOs, it looks at small-scale farming rather than big industrial farms, it promotes and encourages the use of local ingredients versus international. It is essentially a group of like-minded cooks, restaurateurs and food advocates who believe in the idea that what developed in the 1950’s of ‘How do we feed as many people as possible, really cheaply and really simply,’ has had profound negative nutritional, social and cultural impacts on the world. They were seeking on trying to reverse that trend or at least provide alternative thoughts around that. At Terra, we are trying to make people aware that we are supporting that idea rather than making the experience slow.” -David, Chef and Owner

History of the Building